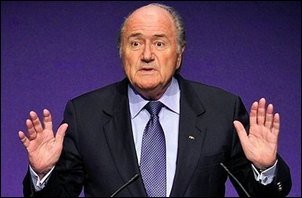 "These gentlemen are more or less advisers, they are not the experts but advisers and what they should be also is the kind of council of wisdom which my executive committee would not like because they think they are the council of wisdom," Blatter told CNN. Blatter also initially appeared to forget Domingo's name, describing him as a man who had filled the world's great opera houses.

FIFA has been embroiled in a corruption scandal in recent months, with reports of bribes of hundreds of millions from FIFA's marketing partners, legislative interference by the organization with prospective host nations and even bribery in the selection of Russia and Qatar as host countries in 2018 and 2022 respectively. The Sunday Times reported that executive committee members were allegedly offering to sell votes for sale and the selection of Russia was reported to be common knowledge weeks ahead of the vote.

Sepp Blatter has also been unable to escape from the controversy. Blatter was recently re-elected for his fourth term as President of FIFA, running unopposed after his opponent Mohamed Bin Hammam dropped out of the running amid allegations that he offered cash bribes for votes. A total of nine of FIFA's 24-member executive board have been suspended or are currently facing investigation over alleged wrongdoing in the past year, with most of the allegations linked to the selection of host countries for the World Cup.

The scandals have drawn criticism and calls for investigations from around the world. The British Parliament has launched an investigation and a similar effort is underway in Australia.

"There’s been an enormous amount of controversy about FIFA at a time when the interest in soccer has multiplied around the world," Kissinger told Bloomberg. "Given that soccer is such a beloved game, it’s important that there’s no doubt in the way it’s being administered. There’s a need for modernization: that would be my attitude and approach."