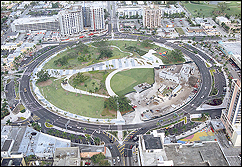 HOLLYWOOD, FL (CelebrityAccess MediaWire) — City leaders in Hollywood, Florida, have admitted that they knew almost three years ago that they did not have enough money to complete the city’s planned Arts Park, and have been forced to make cuts, possibly including the park’s centerpiece performing arts amphitheater, from the final plans.

Originally budgeted at $17.7 million, the park is now estimated to cost at least $32.5 million total, according to the South Florida Sun-Sentinel.. Hollywood has already spent $18.2 million and completed most of the project, but had no money left for additional improvements like the stage.

The amphitheater has been estimated at an additional $14 million in construction costs. The city said in December 2004 that it had $5.9 million for the building, and delayed work to seek additional funds. It has now been exposed that the $5.9 million existed only on paper, and the city was counting on getting millions from Broward County and other investors, neither of which materialized.

The 10.5-acre park, which opened to the public in March, will open a visual arts building this fall, but there is no timetable to build the amphitheater.

The building, with indoor seating for 500 and outdoor lawn seating for 2,000, is required under the city’s 2003 agreement with Broward County, which gave a $5 million grant to get the project started. In March, Broward County announced that it would withhold the final $1.6 million of the grant payment because the amphitheater is not under construction. –by CelebrityAccess Staff Writers