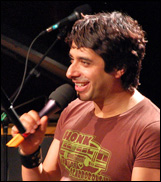 TORONTO (CelebrityAccess) — Former Canadian radio personality Jian Ghomeshi has been acquitted of all charges in the first trial sparked by a host of sexual assault allegations leveled against him.

According to The Guardian, Judge William Horkins on Thursday found Ghomeshi not guilty of four counts of sexual assault and one count of choking dating back to 2002 and 2003.

The judge ruled that the case relied solely on the testimony of witnesses. “There is no other evidence to look to determine the truth. There is no tangible evidence. There is no DNA. There is no ‘smoking gun’,” he said.

The allegations against Ghomeshi first emerged in 2014, when more than 20 women and one man told stories of being physically abused, choked or smothered by Ghomeshi.

At the time, Ghomeshi claimed the encounters were consensual, however since then, he plead not guilty to the allegations. In his verdict, Horkins said that the not guilty verdict was not a conclusion that the abuse did not take place, just that he had found the witnesses to be “less than full and frank and forthcoming” in their testimony to the court.

“My conclusion that the evidence in this case raises a reasonable doubt is not the same as deciding in any positive way that these events never happened," Horkins wrote.

Until the accusations against Ghomeshi surfaced in 2014, he served as the host for the popular radio show Q on CBC's Radio One and more than 150 stations in the U.S. and known for both his socially progressive views and engaging interview style.

Following the publicity surrounding the allegations, CBC fired Ghomeshi and stopped airing his interviews. A spokesperson for the CBC told the Toronto Star at the time that the decision to end Ghomeshi's association with the broadcaster was made after what was described as graphic evidence that Ghomeshi had “caused physical injury to a woman,” was made available. – Staff Writers