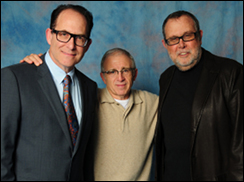 Fair, a music producer, was formerly president of both A&M and Geffen Records chairman, while Palmese was executive VP of promotion for the RCA Music Group.

Fair and Palmese will continue working in their respective fields of A&R and record production and marketing and promotion at Front Line while working directly with Irving Azoff, chairman/CEO of the Front Line Management Group and Live Nation.

Front Line Management Group was founded in 2004 and is owned by Live Nation Entertainment. The company manages more than 250 clients including the Eagles, Christina Aguilera, Neil Diamond and Kenny Chesney.

Azoff said in a statement, "When proven industry superstars such as Richard and Ron are available, I know I need to have them join the Front Line team. Our artists and managers have just hit the lottery."

Fair has a 30-year track record as an A&R executive and record producer. He is known for shepherding the career of Aguilera and his contributions to producing and providing A&R services for the Black Eyed Peas, Mary J. Blige, Queen Latifah and others. His recordings have won 18 Grammy Awards. He previously held positions at Chrysalis Records, RCA Records, Island Records and EMI Records. Fair's current projects include Matt Goss, children's' television show "The Gonnabeez," The New Pussycat Dolls, and this season's finalists from NBC and Universal Record's hit show "The Voice."

"Teaming up with Irving Azoff is a spectacular new beginning for me," Fair said in a statement. "I look forward to working closely with Irving, Richard Palmese and Front Line's incomparable roster of managers and artists. We will also focus on discovering, nurturing and developing a new generation of superstars and hit music-intensive branded entertainment.

Richard Palmese began as a morning deejay at KSHE radio while attending St. Louis University and soon joined Clive Davis at the newly formed Arista Records in 1975 and was named senior VP of promotion in 1980. He joined MCA Records as executive VP of marketing and promotion in 1983, and was named president of MCA Records from 1990-1995, before returning to work with Davis in 1996 as senior VP at Arista Records.

"I am thrilled to be working with Irving and the Front Line team, and we're ready to blaze new trails with Front Line's talented artists and managers," Palmese stated. "Working with Ron Fair is an added bonus, and I am confident that together we will create winning strategies across all musical platforms."