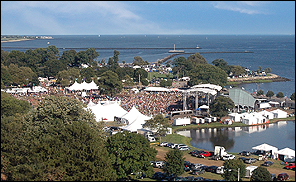 BRIDGEPORT, CT (CelebrityAccess MediaWire) — The popular northeastern Gathering Of The Vibes festival is preparing for its 4-day return next summer from July 21-24 at Seaside Park in Bridgeport, Connecticut.

As of yet, no lineup has been announced for next year's event, but the list of past performers includes: The Allman Brothers, Crosby Stills & Nash, Furthur with Phil Lesh & Bob Weir, James Brown, The Black Crowes, and Damian Marley and Nas, alongside breakout acts like Umphrey’s McGee, Sharon Jones & The Dap-Kings, Jackie Greene, and tri-state favorites The McLovins. Vibes has also traditionally made space for up-and-coming artists and invites submissions at: govibes.com

Last year's event drew more than 30,000 fans and raised more than 100,000 for charitable causes, including an inner-city splash pad and the support of the families of fallen Bridgeport firefighters.

Early bird and VIP tickets for the event will go on-sale on Nov. 26 (AKA "Black Friday"). Early bird camping packages will be available at limited quantities for $150. A limited number of VIP packages will also be available, which include: expedited exclusive entry, rock-star parking, shaded camping area along with catered meals, snacks and beverages. VIPers also have access to private bathrooms and hot showers all weekend long. – Ian Courtney