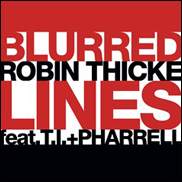 LOS ANGELES (CelebrityAccess) — Following a successful copyright lawsuit against Robin Thicke, and Pharrell Williams, The family of Marvin Gaye has filed for a court injunction, seeking to prevent copying, distributing and performing of the song "Blurred Lines."

"The trial in this action only included revenue from past sales of 'Blurred Lines.' The Gaye family is requesting an injunction so that the parties have time to negotiate how their father will be credited and how future sales will be shared," Gaye family lawyer Richard Busch told ABC News.

"This type of relief is authorized by the Copyright Act and we believe is neither controversial nor unusual once a determination of infringement has been made," Busch added. "That is because, without an injunction, the infringing product continues to be sold and the party whose work has been infringed is not receiving appropriate credit for their contribution, is not receiving a share of the copyright, and is not participating in the revenue from those sales. We would hope that an agreement will be reached so that, if the court decides to issue an injunction, it would then be lifted by agreement."

According to the Associated Press, the Gaye family is also seeking to expand the lawsuit verdict to T.I., who performed on "Blurred Lines," as well as Universal Music, Interscope Records and Star Trak Entertainment. The jury had ruled that T.I., who had a co-writing credit on Blurred Lines, did not infringe on the Gaye family's copyright. – Staff Writers