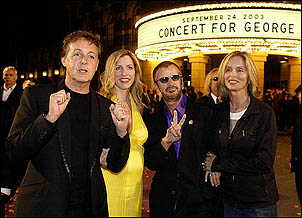 (CelebrityAccess News Service) – Rock musicians gathered at Royal Albert Hall in London on November 29, 2001, to pay tribute to one of their own, the legendary George Harrison, on the one year anniversary of his death. That night, Harrison's closest friends gathered to perform a collection of his music for a live audience.

Concert For George was captured on film and opens theatrically October 3 in New York, Los Angeles and select regional markets. All proceeds from the concert, the film and the DVD will go to The Material World Charitable Foundation, founded by Harrison in 1973.

Concert for George is far more than a concert film; it is a soulful cinematic tribute to a musician
whose vision transcended the ordinary and whose talents contributed to a revolution in the music industry. Under the musical direction of Harrison's longtime friend Eric Clapton, the film captures an emotional gathering of musicians such as Jeff Lynne, Paul McCartney, Tom Petty and the Heartbreakers, Billy Preston and Ringo Starr. Truly a rare moment in music history, this documentary showcases these legends of music not likely to perform together on the same stage again. Concert For George is directed by Britain's David Leland, whose credits include Wish You Were Here (BAFTA winner), HBO's Band of Brothers television series and The Traveling Wilburys video Handle With Care.

"The Concert for George was all I hoped it would be. The glue that held it together was our love for George. I don't think I've ever heard a band play with so much emotion and respect," said Harrison's widow, Olivia Harrison.

"All I wanted to do was really, share our love for George and his music," said Clapton of his vision for the Concert For George.

"George kept up a relationship with everybody on that stage like old friends, old pals on stage, hanging out in rehearsals and back stage with everybody. It was a great way of getting closure, because we all had our stories and our memories and our laughter and our sad points of view, and it was just so great to be around all these people for me, that you could laugh and cry about, you know different moments in our life that George had touched," said Starr.

The documentary is A @radical.media Production, produced by Ray Cooper, Harrison's longtime film producing partner, Olivia Harrison and Jon Kamen, and is meant as a celebration and tribute to Harrison's extraordinary musical career.

Harrison's favorite skits, including participation from surprise guest Tom Hanks. The show also pointed to Harrison's spiritual side with Anoushka Shankar and a 16-piece orchestra of Indian musicians performing a special composition by her father and Harrison's mentor, Ravi Shankar. The piece was entitled Arpan, meaning offering. Joe Brown closed the evening with the old standard, "I'll See You In My Dreams." –Bob Grossweiner and Jane Cohen