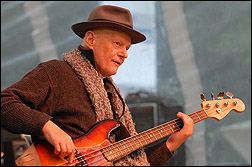 In a country not known for its rock stars, East Germany's Klaus Renft charted his own course. Born Klaus Jentzsch in 1942, Klaus grew up in Leipzig, which was where he formed his first band. An early fan of American rock music, Renft idolized early adopters such as Chuck Berry, The Beatles and the Stones, listening to them on western broadcast radio and this informed his performance style. This was not entirely popular with the East German government at the time, and he clashed with them repeatedly, earning him repeated performance bans.

The Klaus Renft Combo persisted however and the gradual thaw in the early seventies seemed to create space for rock music, however band mate Gerulf Pannach, who assisted in the songwriting endeavors for the band, became increasingly politicized and critical of the government. Finally, in 1975, the band's performance license was not renewed by the East German Ministry of Culture, and Renft was allowed to migrate to West Berlin.

Upon his departure, The Klaus Renft Combo' music was pulled from distribution entirely but they became an underground favorite, with one Berlin newspaper saying that he was the "absent idol of East German youth."

Renft lived quietly, working as a sound engineer at a West Berlin theater until 1989, when the cold war ended, allowing Renft to return to performing. It was difficult for him to recapture his previous successes however, and his post cold war music seems to encompass this frustration.

He is survived by his companion, Heike Stephens and two daughters. – CelebrityAccess Staff Writers