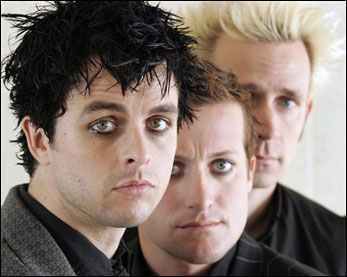 (CelebrityAccess MediaWire) — "American Idiot," the long-awaited new album from Green Day on Reprise Records, debuted on September 29 in the United States at Number 1 on Billboard Magazine's Album Charts scanning over 250,000 units. This marks the highest debut for the band in their 15-year career, and the first time they have reached the Number One position. The album also debuted at the top of the charts in the United Kingdom, Canada, Japan and Australia.

Since its release, "American Idiot" has also shot to Number One on the Modern Rock Chart and Top 10 on the Rock Chart in the US and continues to receive heavy airplay in territories spanning the globe. It has been deemed Buzzworthy by MTV; Artist of the Month on Launch, the music destination of Yahoo!. The band has also received extensive media attention in both the alternative and mainstream press, gracing the covers of magazines such as Alternative Press, Spin, Kerrang, Guitar World, Bass Player and Drum. The band performed "American Idiot" on the "Late Show with David Letterman" on September 20th with special guest, Senator John Kerry, and recorded Sessions@AOL, to also be aired later this month on Fuse.

These chart positions around the globe mark the first time the band has debuted at Number One in the UK, Australia and Japan. To date the album has sold in excess of 1,000,000 units worldwide and climbing. In one short week, "American Idiot" has been certified Ppatinum in Canada and Japan and gold in the UK, Ireland, Australia and Indonesia.

Green Day will kick off the US leg of their world tour on October 19 in Ft. Worth, TX at the Convention Center and will tour Europe, Australia and Asia in 2005. –Bob Grossweiner and Jane Cohen