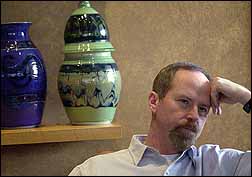 The New York Post reports that Michael Greene's days as head of the Grammys may be numbered. Music industry insiders said the board of the National Academy of Recording Arts & Sciences will vote on whether or not to keep him on as chairman by the end of the month. Greene's salary averages $2 million a year, not including such bonuses as a Mercedes and his $1 million membership in the Beverly Hills Country Club.

The Post acknowledges that Greene has made more than his share of enemies, including Rudy Giuliani,
who barred the Grammy Awards show from New York after Greene unleashed a foul-mouthed tirade at a young female mayoral aide. NARAS and Greene have also given an employee $650,000 to settle a sexual harassment suit.

"He's on his way out," said one insider who added, "Unfortunately, they'll
probably give him a huge payoff to leave." But another music executive, who'd heard the same thing sighed, "Mike is so teflon – nothing sticks to him – that I won't believe it until I see it."