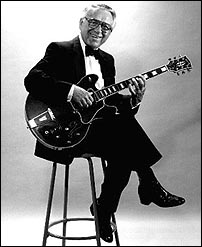 DENVILLE, N.J. (AP) — Tony Mottola, a guitarist who played with Frank Sinatra and on NBC's "The Tonight Show" over the course of a 50-year career, has died. He was 86.

Longtime friend and colleague Bucky Pizzarelli described Mottola as being able to read any piece of music put in front of him.

"He could interpret something and it was really Tony Mottola," Pizzarelli told The Star-Ledger of Newark. "He put a stamp on it. His sound was very warm, tender and expressive. He never hit a bad note in his life."

Mottola's career began in 1936 when he toured with George Hall's orchestra. He made his recording debut in 1941 in duets with Carl Kress. Mottola recorded with Sinatra a few years later.

In 1951, he became music director for the CBS-TV drama series "Danger." He was a regular member of Skitch Henderson's orchestra on "The Tonight Show" from 1958 to 1972.

Mottola also received an Emmy for his score to "Two Childhoods," a television documentary about the early lives of Hubert Humphrey and James Baldwin.

From 1980 until his retirement in 1988, Mottola toured with Sinatra and was spotlighted in duets with the singer. Mottola performed for a month at Carnegie Hall with Sinatra and then went on to perform at the White House.

Mottola played nearly every day at home after retiring, his son said.

Mottola and his wife Grace, known as Mitzi, were married for 62 years. He is also survived by his son, three daughters, seven grandchildren and six great-grandchildren.