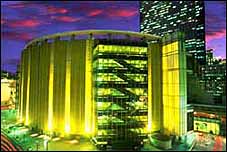 In his newly appointed role, Ratner, 44, will become a key member of Madison Square Garden's office of the chairman, which oversees the sports teams, entertainment properties, television networks and other related activities, as well as the main arena complex, Radio City Music Hall and the Hartford Civic Center.

"Hank has been instrumental in developing and implementing the strategic direction of the overall company," said Dolan. "We also rely on his thoughtful judgment, insights and leadership as we have pursued strategic initiatives and transactions that have contributed to Rainbow and Cablevision's growth as well as the development of our sports business. Given his excellent track record, we have no doubt that Hank will be a meaningful addition to MSG's office of the chairman."

"MSG's goal has always been to provide its customers with top notch live entertainment, whether its sports, music or original productions," said Ratner. "This along with Cablevision's suite of innovative products and services has made the company an integral part of people's everyday lives throughout the New York area. I look forward to working with both management teams closely on the continued growth of these businesses as we evolve and execute the company's strategy to ensure that Cablevision remains a leading source of entertainment and communications for its customers."

In his role as vice chairman of Cablevision, Ratner works closely with Dolan on the strategy and direction of all of the company's divisions and operations while also overseeing key strategic initiatives. This includes Cablevision's recently announced plan to create two distinct companies by spinning off Rainbow DBS and three of Rainbow Media's national networks, which will leave Cablevision to focus primarily on its core regional cable, telecommunications, sports, and entertainment assets.

Throughout his tenure with the company, Ratner has been influential in formulating and implementing both management activity and strategic direction for both Rainbow and Cablevision. Recently he was responsible for negotiating Rainbow's sale of Bravo to NBC for $1.25 billion and helped guide Cablevision's participation in Northcoast's agreement to sell its PCS licenses to Verizon. He played a primary role in many key transactions including the agreement between Rainbow and MGM, and the establishment of Rainbow's partnership with NBC. In addition, Ratner has played an integral part in executing a number of the company's sports initiatives, including the negotiations with News Corp., which led to the creation of Fox Sports Net and to Fox's $850 million investment in Rainbow's sports properties; and, Cablevision's purchase of Madison Square Garden, the New York Knicks and New York Rangers franchises, and MSG Network. –Bob Grossweiner and Jane Cohen