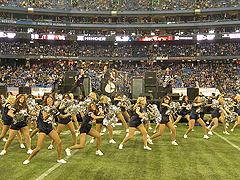 TORONTO (CelebrityAccess MediaWire) — The Buffalo Bills and the NFL tapped Select Artists Associates to produce a special Halftime concert with rock band Hinder for the Buffalo Bills vs. the Chicago Bears game at the Rogers Centre in Toronto, Canada.

Hinder performed two of their hits, Lips of an Angel and All-American Nightmare during the 12-minute Halftime.

The game, attended by 50,746 fans was the Bills 3rd regular season game at Rogers Centre, part of a five year Bills – Toronto Series, which includes three more games (including one pre-season) over the next two years.