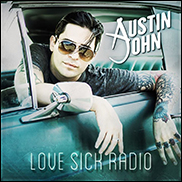 OKLAHOMA CITY (CelebrityAccess) — Members of the rock band Hinder have filed a trademark infringement lawsuit against their former frontman over the use of the band's trademark.

According to The Oklahoman, the lawsuit, filed on Friday in federal court in Oklahoma City, alleges that Austin John Winkler used the band's trademark to bolster his solo career after he ankled the band in 2013.

In the lawsuit, Winkler's former band members say he violated an agreement he signed when he left the band that acknowledged he had "no rights in the (trademark), or to promotional use of the name Hinder, and accepting a very limited license for use of the mark under certain express restrictions." However, the members of Hinder allege that Winkler violated that agreement when promotional materials from tours in 2016 and 2017 showed Hinder's name in a larger font than Winkler's.

"Hinder has no ill will toward Mr. Winkler and would have much preferred to privately resolve this matter. Mr. Winkler, however, was apparently uninterested in such a solution," band attorney Blake Johnson told The Oklahoman on Monday. "Though they've now been forced to seek legal redress, the band is less interested in a monetary reward and more interested in protecting Hinder's valuable intellectual property and its brand and reputation.

An email to Winkler's publicist regarding the lawsuit wasn't immediately answered Monday, the Oklahoman said.