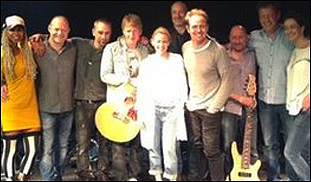 LONDON (VIP NEWS) — A special concert that would have seen Jason Donovan and Kylie Minogue reunite on stage for the first time in more than 20 years has been cancelled.


Pete Waterman said the gig at London's Hyde Park on Wednesday had been called off due to recent bad weather.


He told the BBC the grounds had now become "unsafe" following rain at the Wireless festival over the weekend.


Organizers said ticket purchases made through Ticketmaster and See Tickets will be automatically refunded.


Fans who bought tickets elsewhere were advised to contact the vendor.


The outdoor concert was to reunite artists who found fame on the PWL record label, which is marking its 25th anniversary.


Waterman said he was "devastated for everyone" involved.


"People have come from all over the world to make this happen," he said. "We're trying to work out what we can do."


"Police, parks and safety people have said it's completely unsafe at the moment.


"We saw the damage caused by the Wireless festival at the weekend, but we can't get lorries on to the site to dump bark and mulch on the ground."


He added: "What can I say? We've had exceptional weather. If it's not safe, it's not safe and you can't control that."
'Extremely disappointed'


Kylie Minogue, who yesterday posted a picture of her rehearsals with Jason Donovan, expressed her disappointment in a statement on her website:


"I am so sorry to hear that the concert tomorrow had to be cancelled," she said.


"I feel for all the fans who had bought tickets to this special event. Jason and I were rehearsed and excited to share this moment with everyone."
Kylie Minogue and Jason Donovan in rehearsals Kylie posted this photo of rehearsals on her Twitter account on Monday


Acts including Steps, Sinitta, Sonia, Rick Astley, Bananarama, Pepsi and Shirlie and Brother Beyond had also been due to perform at the concert.


On his Twitter account Donovan said they were all "extremely disappointed" and that they had not taken the decision lightly.


He added: "Can't believe it… Was really looking forward to celebrating the wonderful work of Mike, Matt and Pete and all who made those songs so special to a generation!"


Waterman said he hoped the concert could be restaged at some point in the future, but added "it's not that easy" as Steps are due to go on tour and other acts have prior commitments.


In a statement, organizers said: "Following the severe and unprecedented weather conditions across the country the site was declared unfit this morning to host the concert.


They added: "The potential risk to staff and music fans was too great for the event to go ahead. Live Nation and The Royal Parks sincerely regret the disappointment caused by this cancellation."