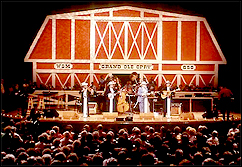 NASHVILLE (CelebrityAccess MediaWire) —
The International Entertainment Buyer’s Association (ieba) will host a special tribute to the Grand Ole Opry honoring its 80th anniversary to be held at this year’s conference. The ceremony will be held on October 3 at 9:45 AM in the Hilton Ballroom at the Hilton Suites in Nashville, TN and will include a special performance by Opry members Martina McBride, Terri Clark, Dierks Bentley, Little Jimmy Dickens, and The Whites. Opry executives Pete Fisher and Steve Buchanan will also be on hand on behalf of the Opry with special guest Congressman Marsha Blackburn presenting.

“iebaLIVE wanted to not only acknowledge but honor the vast role the Opry continues to play in the careers of country music artists,” says iebaLIVE executive director Patti Burgart.

Every week, the Grand Ole Opry blends the excitement of a live audience, the heritage of the world’s longest-running live radio show, and an incredible mix of country music talent to create a uniquely American experience like no other. During the past 80 years, the Grand Ole Opry has broadcast more than 4,000 shows, no two of them exactly the same.

McBride became a member of the Grand Ole Opry during the taping of its 70th anniversary TV special in 1995. “It’s so incredible,” she said. “Whenever I do the Opry it still feels like the first time. I still get nervous. The Opry’s going to be here for hundreds of years, and I’m just proud my name is on that list. It’s a highlight of my life.”

Clark joined the cast of the Grand Ole Opry on June 12, 2004, culminating a dream since her childhood days.

Dickens was first introduced to the Opry on the Ryman Auditorium stage by Roy Acuff in 1948, and the Country Music Hall of Famer has been wowing Opry audiences pretty much ever since—longer than any other current cast member—with his flamboyant rhinestone-studded outfits, wild novelty hits, and country humor.

The newest member to the Grand Ole Opry honoring its heritage at iebaLIVE!, Dierks Bentley, will make his debut as an official member on October 1 when he is formally inducted.
–Bob Grossweiner and Jane Cohen