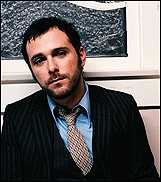 NEW YORK (CelebrityAccess MediaWire) — Wondering where to go for your latest taste in what's hot for indie music now that Starbucks is out of the label business? Try Whole Foods.

Singer-songwriter Greg Laswell's second album, "Three Flights from Alto Nido," is due out on July 8th and his label, Vanguard, is following an aggressive cross-promotional strategy with it, including deals with Marriott to have selected cuts played in hotel lobbies and on the hotel chain's website. An EP from the album, released back in March, was also included in Whole Foods Markets Artist Discovery Series and can be purchased in checkout lanes at the supermarket chain.

The EP, which went on sale one the same day as Mariah Carey's latest album has, according to the Wall Street Journal, nudged ahead of Mariah's sales by 2%.

"It's a combination of the CD being at an attractive price point, being on the countertop and being an artist who's endorsed by a trusted brand," James Dunne, chief of Inspire Entertainment told the WSJ.

Previously, Laswell served as a spokesman for Apple's GarageBand software and his songs have been featured in 11 TV shows, including "Grey's Anatomy." Vanguard is looking for other placements for the performer and this summer, he will be featured in a Pepsi/Amazon ad and his music will be played prior to the previews at several large movie theatre chains such as AMC and Landmark.

"It's about repetition of hearing that song in the grocery store or the movie theater and going to where the people are, because they're not going to the record store shopping for new music like we all used to," Laswell told the Journal.

In the past, indie artists had avoided corporate promotional deals like the plague, concerned that such corporate connections would trash their indie credentials. But as major labels and traditional distribution chains come unraveled, artists and indie labels are looking for new strategies for reaching the consumer. The course is by no means clear; specialty coffee retailer Starbucks's experiments at taste-making for indie music appear to have failed as the company recently announced that it was selling its stake in their Hear Music label to Concord, their partners in the endeavor.

Vanguard's strategy, at least for the present however, appears to be working. The label has noticed an increase in visits to Laswell's MySpace page since the start of their promotional efforts, with visitors coming from a diverse array of demographics, the WSJ reported.

"At an independent label, you have to figure out inventive ways to promote without spending the money. People are doing what they can these days and looking for creative ways to sell music," Kerri Borsuk, director of marketing for the Nettwerk Music Group told the Journal – CelebrityAccess Staff Writers