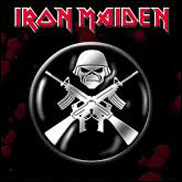 According to Billboard, the band employed a number of approaches to cut down on ticket speculation for their upcoming "The Book Of Souls" tour, starting May 4, including the extensive use of paper ticketing. As well, three of the largest secondary market services in the UK — Getmein and Seatwave (Both owned by Live Nation) and StubHub — all agreed to not list tickets for the tour.

The effort appears to have paid off and Billboard reported that only 207 tickets for the 12-date trek ended up in listings on Viagogo, compared with more than 6,000 for the band's last outing in 2011. Of the 207 tickets, the lion's share were identified as fraudulent and reported while the rest were nullified per the original terms of purchase.

“We are delighted that the paperless ticketing system and other measures we instigated here in the UK have proved a massive deterrent to touts and counterfeiters,” says Iron Maiden manager Rod Smallwood said in a press statement.

“We want to thank our fans for their enduring support and patience. We appreciate that our stringent policy has meant fans having to jump over one more hurdle in the ticket-buying process but the results speak for themselves and I think everyone can agree this was well worth it. On the first day of public sale, we sold over 100,000 tickets nationwide direct to genuine fans through the proper legitimate channels. This is an incredible achievement and victory for concert-goers, not least as this is a full 12 date UK tour we’re undertaking, not just a couple of dates in the bigger cities. We’ve calculated that around one million pounds worth of mark-up on tickets, is not sitting in the hands of touts, but instead the tickets are sitting in the hands of the fans at the correct price and we think that is a great result and makes all our efforts worthwhile,” he added.