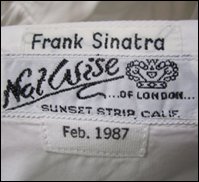 ORANGE, CA (CelebrityAccess MediaWire) — A tuxedo shirt tailor-made for Frank Sinatra and purchased for $5 at a Newport Beach yard sale last year will sell to the highest bidder at a California auction on Jan. 1.

It is unclear how the shirt, created by Beverly Hills men's clothier Nat Wise, came into the possession of the person conducting the yard sale, but what is indisputable is that the garment is authentic.

"The shirt was purchased at the yard sale by a gentleman named Rick Gorski, who is a laid-off construction worker," said auctioneer Don Presley, who will offer the Sinatra shirt and other celebrity items in a 600-lot auction this weekend according to the press release. "Mr. Gorski's brother, who collects antiques, examined the shirt's labels and urged Mr. Gorski to research the shirt's background. He knew its value would be greatly increased if it could be proved genuine."

Several labels on the shirttail led Gorski straight to the source of the information he desired. The tags bore the name "Frank Sinatra," the date "Feb. 1987" and the name and logo for "Nat Wise of London…Sunset Strip, Calif."

Gorski discovered that in 1987, Nat Wise had merged with Jack Sepetjian's company, Anto Beverly Hills. All Nat Wise archival records were transferred to the new owners.

In those archives, Sepetjian found records for the Sinatra shirt that Gorski now owned. "The shirt's measurements exactly matched the ones on record for Mr. Sinatra," said Presley. "Apparently he wore the shirt to a widely publicized 1988 benefit concert."

Presley said he has "no clue" how much the shirt will sell for. "Nowadays, when something as intangible as a Marilyn Monroe X-ray can sell for $45,000, it's anybody's guess," Presley said according to the press release.

Speaking of Monroe, a two-piece ensemble that purportedly belonged to the star is another featured lot in the auction, but it's not without its controversy. The outfit was formerly the property of Robert Slatzer, the late Hollywood biographer and newspaper reporter who claimed he and Monroe were wed in 1952. Till his death in 2005, Slatzer insisted his story was true and claimed studio bosses had forced him and Monroe to annul their marriage only days after exchanging vows in Mexico.

The ensemble has a label from 20th Century Fox, the studio to which Monroe was contracted at the time of the alleged wedding.