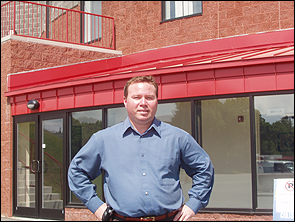 (CelebrityAccess MediaWire) — Jeff Schumacher has been named general manager of Global Spectrum's Colisee in Lewiston, ME., where he will oversee the facility's day-to-day management including marketing,
public relations, facility operations, ticketing, finance, booking and food and
beverage operation. Global Spectrum was recently hired to manage the 3,700-seat multipurpose sports and entertainment venue (CelebrityAccess, May 4, 2005).

"The Colisee is really experiencing some positive momentum right now thanks to
the hard work of the current staff, the board (L.U.C.C.E.) and the City of
Lewiston," said Schumacher. "I feel confident that we will exceed the expectations of the board and the City of Lewiston. My initial focus will be to bring some of my previous relationships
with promoters to the Colisee and re-establish a working relationship with those
promoters that are already familiar with the facility."

Schumacher, in his fifth year with Comcast-Spectacor/Global Spectrum has
recently moved to Lewiston from South Texas where he was acting general manager of the Dodge Arena. In October 2003 he assisted with the opening of the
Dodge Arena serving as assistant general manager/director of marketing. In this
role he was responsible for all marketing and media relations as well as group
sales. He also supervised all aspects of event production including the event
coordinator, event supervisors and approximately 60 event staff consisting of
ushers, ticket takers, security and parking attendants/cashiers.

Schumacher was
also the driving force in instituting Global Spectrum's "How you Doin" customer
service program. He also assisted the previous General Manager with all aspects
of the day-to-day operation of the Dodge Arena before taking over as acting
general manager in October of 2004. Schumacher continued with the event
bookings of the Dodge Arena exceeding total budgeted events for the year six
months prior to the end of the budget year.

Prior to opening the Dodge Arena Schumacher worked in Philadelphia as director
of soccer operations for Comcast-Spectacor, parent company to Global Spectrum.
In this role he handled the day-to-day operations for the Philadelphia KIXX of
the Major Indoor Soccer League (MISL) and Philadelphia Charge of the Women's
United Soccer Association (WUSA). Specifically he assisted the Charge in
increasing Season Ticket sales 100% from year two to year three. He was also
directly responsible for marketing, marketing, public relations, game day
operations, grass roots marketing and the internship program for the two teams
as well as assisting with sponsorships.

Prior to joining Comcast-Spectacor/Global Spectrum , Schumacher held several positions in the industry including director of marketing and booking of the
18,000-seat Firstar Center (now U.S. Bank Arena), marketing and sales manager
for Feld Entertainment in the Southeast Region and marketing and PR manager of
the Wicomico Youth and Civic Center in Salisbury, MD. In Cincinnati he was responsible for
assisting promoters with show marketing and PR as well as group sales. He also
assisted the general manager with event bookings and served as manager on duty
as needed on event days.

"I am very excited about this new opportunity in Lewiston," said Schumacher.
"We have already booked a concert (Weezer) and formed a new relationship with
Clear Channel. Positive discussions
are also underway with other promoters including possible confirmations in the
near future with World Wrestling Entertainment and Oscar de la Hoya's Golden Boy
Promotions (boxing)." — Jane Cohen and Bob Grossweiner