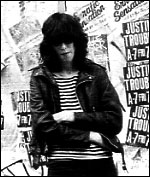 The fifth annual Joey Ramone Birthday Bash will be an all-star blowout show at
New York's Irving Plaza on May 19. The event honors Ramone's contributions as front man of the
The Ramones and as a solo artist. For
decades, he hosted a blowout birthday party every year. Since his
passing, his mother Charlotte Lesher and brother Mickey Leigh have
continued the tradition of a birthday bash celebrating the life of
Ramone, the spirit of the Ramones and "keeping us, and Ramones fans,
occupied and positive on what would otherwise be a sad, somber day,"
says Leigh.

For the second consecutive year, the bash has has sold out well before the line-up was even announced clearly indicating that the Joey Ramone
Birthday Bash has turned the corner from its more casual stages in
previous years and is snowballing into one of the most anticipated
annual Rock 'n' Roll events in New York. That the event is even bigger now
at its five-year mark has also attracted growing interest from
sponsors, the number of which is now eight, up from none it had only
a few years ago.

Verizon Wireless will "Phone Cast" three performances from three
birthday bash artists as part of a V CAST Encore audio-visual stream
to mobile phones anywhere in the world for up to seven days.