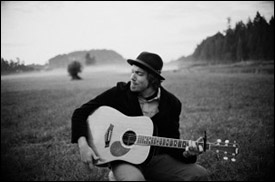 (Hypebot) – You’re an independent artist about to release your first album in four years. On release day, in addition to making the album available via download stores and streaming, you give away free downloads of the whole album away on NoiseTrade. Crazy? No. Josh Garrels' new album Home just charted on Billboard despite (or because of) also being available for free.

Guest Post by Chandler Coyle on The Coyle Report

Giving away a new album on the day that it’s first made available has become for me, the ultimate form of ‘release,'” explains Garrels. “I pour my sweat and blood into the work and an album often takes me years to complete, but somehow, making it available for free creates a healthier relationship between myself, the work and the listener. In short, giving away my music over the years has proven to be life-giving practice.”

Josh Garrels is a full-time musician with a wife and three children, why would he give away the very product of his work in this manner? The answer can be found in the data, or actually, the answer is the data. With each free download given away over the years on Bandcamp and NoiseTrade, Garrels has obtained an email address and often a postal code.

Over the past five years Josh Garrels has built up a mailing list of well over 200,000 fans by giving away almost 450,000 free downloads. ‘Free’, like a download, CD, or LP, is just another music format for Garrels. Giving away his music in exchange for an email address via Bandcamp and NoiseTrade has been a reliable way to get his music heard and to help grow his mailing list — and resulting fanbase — well beyond the norm.

For his most recent project Home, Garrels opted for a featured promotional spot within one of NoiseTrade’s mailers which goes out to the platform’s over 1.3 million subscribers. His album was also featured on NoiseTrade’s home page for a full week.