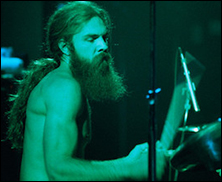 (CelebrityAccess) — A federal judge has awarded members of Lynyrd Skynyrd a permanent injunction blocking a biopic based on the life of former Skynyrd drummer Artimus Pyle.

In the ruling on Monday, U.S. District Court judge Robert Sweet ruled that "[Film producers] Cleopatra [Records] is prohibited from making its movie about Lynyrd Skynyrd when its partner substantively contributes to the project in a way that, in the past, he willingly bargained away the very right to do just that; in any other circumstance, Cleopatra would be as 'free as a bird' to make and distribute its work."

Production on the film, "Street Survivors: The True Story of the Lynyrd Skynyrd Plane Crash" that was based on the life experiences of Pyle, will be ended permanently following the ruling, Rolling Stone reported.

The ruling was based on consent order that Pyle signed with the band in 1988 that gave Pyle permission to sell the rights to his own life story, but barred him from using the band's name as well as the rights to the story of his fellow bandmates Ronnie Van Zant and Steve Gaines who were killed in an infamous 1977 plane crash

Van Zant's brother Johnny Van Zant and Skynyrd guitarist Gary Rossington along with the Van Zant and Gaines estates sued Pyle and Cleopatra in June over the biopic, alleging that it would cause 'serious harm' to the band and its former member's reputation.

Cleopatra's screenplay evolved from a lengthy interview with Pyle, who was promised 5% of the net profits from the film for serving as a consultant and co-producer on the film, Rolling Stone said. Judge Sweet noted that the film could proceed, but in order to do so, it would need to sever all ties to Pyle in order to be free of the constraints imposed by the 1988 consent decree.