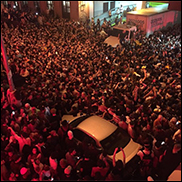 NEW YORK (CelebrityAccess) — Kanye West sent hints out to his social media followers leading them to what the rapper alluded to be a surprise late night concert at Webster Hall.

Fans turned out by the thousands, shutting down the New York City area around the venue. According to social media over two thousand hopeful fans crowded the East Village in New York.

Kanye posted "Show at 2 a.m. SOLD OUT" contradicting the venues’ Twitter page stating "There is no late show", adding "Please get home safely".

Kanye did do a drive by around three in the morning popping out of his sun roof urging tenacious fans to request that New York City Mayor, Bill DeBlasio to shut down the area.