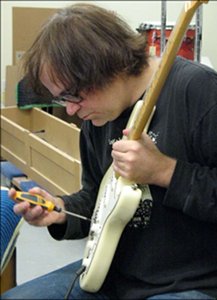 The appearance is just a few hours before Kenny Wayne appears on stage with the all-star line-up of players for a scheduled Experience Hendrix Tour stop at New York’s Beacon Theatre.

The concept behind the Experience Hendrix Tours, dating back to 2004, is to connect contemporary musicians and audiences with the musical legacy of Jimi Hendrix.  In recognition of this, Kenny Wayne Shepherd will be playing the same white Fender Stratocaster guitar that Jimi Hendrix played on the morning of August 18, 1969 at the Woodstock Festival.  It’s the same instrument on which Hendrix played “The Star Spangled Banner,” the recording of which was inducted into the Grammy Hall of Fame in 2009.

Jimi Hendrix purchased the guitar in 1968 and played it at many concerts including the 1969 Newport Pop Festival and his final concert at the Isle of Fehmarn on September 6, 1970. The guitar was acquired by Experience Music Project (EMP) in 1992 and has been in the Seattle-based museum’s permanent collection since that time. EMP has consented to bring the guitar to New York, accompanied by two curators, in support of Experience Hendrix’s continuing efforts to bring the music of Jimi Hendrix to successive generations.

After the Fallon taping wraps, the 'Woodstock Strat' will be transported to the Beacon Theatre and played for the first time in more more than 40 years in front of a live audience.

Kenny Wayne Shepherd was hugely inspired by Jimi Hendrix and, over the course of his career that began when he was only 15 years old, he has closed every one of his performances with Jimi Hendrix’s “Voodoo Child (Slight Return).”