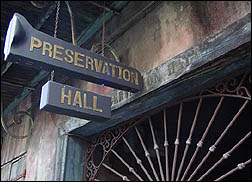 (CelebrityAccess News Service) — More than 40 years after establishing itself as the world's most revered venue for traditional jazz, Preservation Hall in New Orleans
launches its own record label on January 27, with three CD
releases that feature past and present giants of Crescent City music.

Hot Four gives an unusual insight into the band through a series of quartet performances behind the vocals of saxophonist Harold Dejan.
This scaled-down lineup includes one of the youngest members of today's
Preservation Hall Jazz Band, bassist Ben Jaffe, son of co-founders
Allan and Sandra.

Shake That Thing features the current Preservation Hall Jazz Band at
full throttle, with its complement of horns as well as rhythm section, and recorded
in the historic hall.

"These recordings usher in a new period in the life of Preservation
Hall," states Ben Jaffe, who co-manages the Hall and the label with
his mother. "The band has been recorded many times over the years, but
we've started the label because we've realized that no one could
present this music as well as those of us who have lived it all our
lives. Preservation Hall itself is successful because of our attention
to the smallest detail and our love for this music and the people who
play it. Preservation Hall Recordings is based on exactly that same
philosophy."

This commitment is also evident in its state-of-the-art packaging. The label plans to deliver each release in sturdy cardboard containers that bear more resemblance to hardcover books than typical plastic jewelboxes. Each one is made individually by hand through a patented process, based on designs conceived to reflect the
music. "We have too much respect for these artists, and for our
listeners, to put out anything that's less than beautiful," Jaffe
explains.