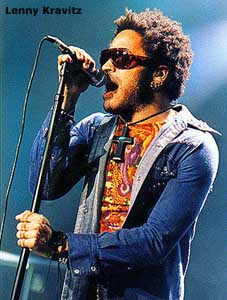 According to MTV – For most of his sixth studio LP, "Lenny", he talks about his heart being beaten up by love, yet he keeps going back for more. He wants a soul mate. Even with the best intentions, you have to understand it's difficult for a playa to retire his jersey without some qualms.

He just needs a little more time. "Dig In," the first single from the album, has a hard rock edge to it and the polar opposite theme of "If I Could Fall in Love." Kravitz sings about being optimistic and throwing caution to the wind, all the while wailing on his guitar. But back to love.

Like everyone in pursuit of Ms. Right, Kravitz makes a few mistakes in choosing women. "She said I want the money/ I know you want this honey/ Your skies will not be sunny/ If you don't bring it home to me," he sings, retelling his girlfriend's threat on "Pay to Play." Over the rock guitars, record scratching and funky drums, Lenny sings about how he endured his dreams being mocked and was virtually pimped out of his money, all for the nookie. Not even his lovemaking adeptness can help him on "Believe in Me." Here, his boo is losing faith in him.

Staying with the funky vibe, Kravitz uses fast-paced drum patterns reminiscent of hip-hop's Down South bounce as a background for his softly sung, love-weary story weaving.

His girl is one tough cookie, though —she's unfazed by him "spending sleepless nights," trying to make her dreams come true. The real reason for him not getting any shuteye, however, is revealed on "You Were in My Heart." "Demons sleep with me in bed/ I can feel their fire," he sings about his inner conflict. "The darkness gets around my head/ Sometimes I go blind."

From demonic to saintly, "God Save Us All" is a plea for help and exhortation for the world to wake up. "We need a leader/ We can't seem to help ourselves," he fervently vocalizes. "Fighting and lying/ We cant seem to let it go/ We live each day on a small piece of borrowed time/ Why aren't we enjoying this crazy ride?"