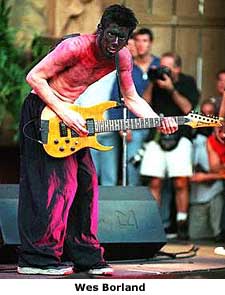 Limp Bizkit guitarist Wes Borland has left the band, according to a post from the group on its official Web site. The post says the split was amicable and both the group and Borland will continue to pursue their respective music careers.

The group will now look for another guitarist and finish writing their next album.

"Wes was a big part of the Limp Bizkit you're used to," the group's post continues," but his decision to leave has left us in a place where we know the best of Limp Bizkit is yet to come. Lethal, John, Sam and I are gonna take this as an opportunity to take our song writing to a whole new level. At the end of the day its all about the music and the music is all we're about. Life is unpredictable and though we're shocked, we're not discouraged. As the world turns, so does Limp Bizkit."