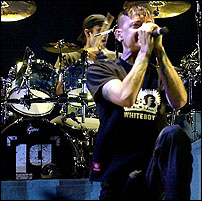 (CelebrityAccess MediaWire) — Linkin Park is not happy with the proposed Warner Music Group IPO, which they feel will not benefit the band. They have asked to be immediately released from the label. The following is a statement from The Firm on behalf of Linkin Park:

"The new owners of the Warner Music Group will be reaping a windfall of $1.4 billion from their $2.6 billion purchase a mere 18 months ago if their planned IPO moves forward. Linkin Park, their biggest act, will get nothing.

"Meanwhile, of the planned $750 million raised by an IPO, only about $7 million will be put toward the company's own operations, with no money going to WMG artists. Additionally, WMG has already seen a widespread reduction of its work force and substantial cuts in marketing and promotion expenditures. Linkin Park has become increasingly concerned that WMG's diminished resources will leave it unable to compete in today's global music marketplace, resulting in a failure to live up to WMG's fiduciary responsibility to market and promote Linkin Park.

"Linkin Park has been responsible for approximately 10% of the entire Warner Music Group's record sales, selling over 35 million records worldwide in just five years. After reading numerous and daily articles about how WMG executives and corporate raiders have ridden the coattails of the creative community to extract massive rewards, Linkin Park has become increasingly offended and discouraged.

"'We couldn't be more grateful for the support we receive from all our fans around the world,'" said Linkin Park. "'We feel a responsibility to get great music to our fans. Unfortunately, we believe that we can't accomplish that effectively with the current Warner Music.'

"The Grammy Award winning group had been planning to start work on their next record, which was slated for a Spring 2006 release. The record was scheduled to follow up Linkin Park's last full-length release, Meteora, which has sold over 10 million copies worldwide. The band now wants off WMG and is weighing all of their options on how to best get new music to their fans. Possible avenues include relying more on touring, merchandising and endorsements, rather than leaving their future in the hands of a weakened WMG. Recently, new Fiona Apple music was released on the Internet for free and for years, bands like the Grateful Dead and Phish have performed new material live and let fans tape for free.

"Music industry attorney Peter Paterno, who represents artists like Dr. Dre, Pearl Jam and Warner Music's Metallica, recently told The New York Times: "The (WMG) guys who are running this thing are looking at it pretty cynically. It's becoming more and more apparent that this is nothing more than a financial play for the investors. It's not about the music or the employees; it's about a return for private equity investors. It's kind of astounding when you sit back and look at the audacity.

"The loss of future Linkin Park recordings will be disastrous for WMG. While there are hundreds of bands signed to the WMG roster, the music business is still a hit-driven industry. For example, the delay of just two new releases from EMI acts Coldplay and Gorillaz recently forced EMI to announce to the marketplace that it would be unable to meet its earlier projections. –Bob Grossweiner and Jane Cohen