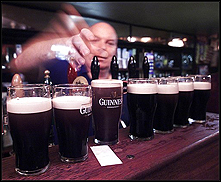 (CelebrityAccess MediaWire) – The United Kingdom’s live music scene is fearing the worst as pubs across the country have so-far failed to reapply for licenses to sell alcohol, according to a report by scotch producer Glenfiddich.

Under the U.K.’s Licensing Act 2003, any establishment that wants to keep selling alcohol must complete the application paperwork by August 6 of this year. The report states that half of all pub, bar and restaurant owners have yet to apply.

British superstars like Coldplay, Kaiser Chiefs and Oasis all started out playing to small crowds in the back rooms of local pubs.

The report also claims that the number of gigs taking place in the U.K. every day could fall from an average of 4,500 to about 2,250 gigs, if the venues are forced to close in November due to a lack of license.

The August 6 deadline has been set by the government as the final date for premises to convert their license and apply for their flexible opening hours and entertainment licenses. It requires everyone in the industry to renew their license, whether they want to open later or not.

“Live music is, for the majority of us, a cherished part of our everyday lives and that’s why we need all venues that have the capacity to put on live acts to apply for their license,” he told the BBC. “I want to se more live music venues taking the opportunity to put on new bands – this is the lifeblood of our music industry.”

The report by Glenfiddich was backed by a number of musicians, including James Blunt, the Kinks, and Razorlight.

Blunt, who is currently holding the #1 spot on the U.K. singles chart with the song “Beautiful”, told the BBC, “There’s such a history of live music in England, which seems so essential for the whole music scene.”

“I cannot stress enough the importance of the early gigs to our ‘rise to fame’,” Carl Dalemo of Razorlight added. “Apart from rehearing almost every day up in Leyton, it was the first gigs in pubs, squats and small venues that made us become the band we are today.” –by CelebrityAccess Staff Writers