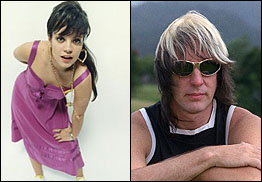 Both venues have undergone extensive remodeling — Deep red walls, refurbished chandeliers, vintage poster, not to mention fresh apples for incoming patrons. To devotees of the legendary Fillmore in San Francisco, one of contemporary music’s most respected and enduring live concert venues, these traditions will seem familiar.

"The Fillmore is a highly regarded music venue whose impact on music resonates far beyond the walls of the actual building itself," says Bruce Eskowitz Live Nation’s Chief Executive Officer of North American Music. "By adapting some of the Fillmore traditions to one of the crown jewels in our venue portfolio, Irving Plaza, we hope to make the concert going experience even better for New York music fans."

The Fillmore East in New York, was originally a Polish dance hall before it became Irving Plaza where it has played host to historic performances by talent such as Led Zeppellin, The Who, Pink Floyd, and Black Sabbath, all UK imports and now Lily Allen will join their august ranks.

"The bottom line is that The Fillmore means something to artists and to fans," said original Fillmore East house manager and longtime Bill Graham associate Jerry Pompili. "It was more than just a building. It was a new concept in the presentation of Rock n’ Roll. There is no better venue in New York City to carry on the traditions we started 40 years ago than Irving Plaza. It’s a beautiful thing."

The opening evening at The Fillmore New York at Irving Plaza will kick off on April 2nd at 8:00 p.m., featuring DJ Aaron LaCrate and the Los Angeles-based duo The Bird and the Bee followed by Lily Allen.

The Theatre of Living Arts, a South Street institution, has been everything from a late night cinema to Counter Culture repertory theater to, most recently, an acclaimed live music venue. Known to Philadelphians as the TLA, the venue has been a catalyst in the careers of several local Philadelphia artists including The Roots, Jill Scott, Musiq Soulchild, and G. Love & Special Sauce. The TLA has also become a major stop for up-and-coming bands and superstar acts for nearly 20 years, with historic shows from Dave Matthews Band, Red Hot Chili Peppers, Bob Dylan, The Arcade Fire, Paul Simon, Jane's Addiction, Justin Timberlake, Radiohead, Nickelback, Norah Jones and John Mayer to name just a few.

A number of highly acclaimed artists are scheduled to play the The Fillmore Philadelphia including Chris Cornell on April 22nd, Peter Bjorn & John on May 3rd, Amy Winehouse on May 6th, and Air on May 8th.