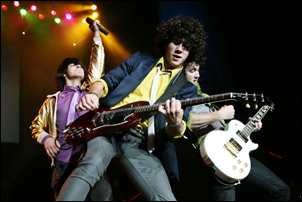 LOS ANGELES, CA (CelebrityAccess MediaWire) — January 3, 2008 – Live Nation, the world’s largest live music company known for its global tours with such pop culture icons as Madonna, The Rolling Stones and The Police, to name a few, has inked a two-year, multi-million dollar worldwide touring deal with the platinum selling music phenomenon, Jonas Brothers. The deal, the first of its kind for an emerging act, is expected to play more than 140 theatres and arenas around the world during the span of the agreement.

The first wave of tour dates, which kicks off the aptly named “Look Me In The Eyes” tour for Jonas Brothers’ new single “When You Look Me In The Eyes,” will embark in Tucson, Arizona January 31. The announcement comes on the heels of a wildly successful year for Jonas Brothers, which included their first platinum album and their special guest appearance on the sold out “Best of Both Worlds” arena tour, massive internet and top 40 radio exposure, and countless TV appearances and magazine covers. Billboard magazine also named the group the pop tour break out pick for 2008.

“This band creates pandemonium wherever they go. They sell out dates instantly and always leave their loyal fans wanting more. We couldn’t be more thrilled to be partners with them on their journey to superstardom,” said Live Nation’s Bruce Kapp.

Tickets for the dates announced today will go on sale beginning on Saturday, January 12th.

“The level of commitment and passion that everyone at Live Nation has shown for our band has been inspiring,” said Jonas Brothers. “Together we are going to bring our show to millions of our fans around the world. We couldn’t be more excited about our future together.”

Jonas Brothers’ self-titled Hollywood Records album was largely written by the brothers themselves, and debuted at # 5 on the Billboard Top 200. Their single “S.O.S.” shot straight to the top of iTunes and the video straight into MTV’s TRL Countdown. Jonas Brothers’ CD was the first to be released in the CD-VU+ format, a 100% recyclable multi-media format. Jonas Brothers have already started work on their new album while on tour for a July 2008 release.

Following their performance on the American Music Awards, and Dick Clark’s New Year’s Rocking Eve, Jonas Brothers have several more upcoming television appearances including The Ellen DeGeneres Show on January 21. They have several upcoming print features including People, Details, Cosmo Girl, Teen Vogue and more. Jonas Brothers recently shot a video for “When You Look Me In The Eyes” while on the road which chronicles the mania they create on tour, and their utter devotion and love for their fans.