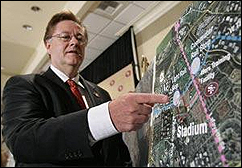 WASHINGTON/SAN FRANCISCO (CelebrityAccess MediaWire) — The House of Blues, one of the most recognized brands in the Live Entertainment world may be looking at expanding into new markets. The chain, recently acquired by promoter Live Nation, is reportedly looking into prospects for opening a club in Nation's Capital. The Washington Post is reporting that HoB has entered into a non-binding agreement with the National Capital Revitalization Corp to start work on a club near Mount Vernon Square. The site is strategically-located, a mere few minutes walk from the Washington Convention Center, The Gallery Place shopping center and Chinatown.

The complex would cost an estimated $120 million and feature a live music hall, a hotel, shops and restaurants. It would anchor redevelopment plans for the Mount Vernon Square neighborhood. "We see this as an opportunity to create a destination location," said Kevin Warner to the Post Warner, who has led negotiations on the project for the quasi-governmental group National Capital Revitalization Corp, whose board includes members appointed by the mayor and the president added that "This would not only be a tourist destination but also a business destination, as you think about its proximity to the convention center, Capitol Hill and the Verizon Center."

While some local residents cheer the addition of a significant new music venue, not everyone is equally enthusiastic. Promoter Seth Hurwitz, who owns the 9:30 Club and MP Productions told the post that "We will lose half of our business, at least."

Their concern stems from the vast resources behind HoB, following their acquisition by Live Nation. "There are a finite number of artists that you can draw for this size of venue," local promoter Michael Jaworek told the post "If another venue comes along the same size, there will be head-on-head competition. It's a case of Darwinism at that point."

Washington isn't the only place where Live Nation is looking.

The Mercury News is reporting that HoB may be planning a new 7,000 seat music hall at Great America in Santa Clara, adjacent to the location that the San Francisco 49ers are considering for their new stadium.

This isn't the first interest that HoB has evidenced for the area. Previous plans to build a $96 million concert hall at the county fair grounds had been nixed by city planners.

Plans obtained by the Mercury News for the new hall offer a new glimpse at development planned for the 40 acre site. This is bolstered by the fact that the city has already obtained funding for a new parking garage in a lot adjacent to the proposed location.

Santa Clara city councilman Kevin Moore expressed enthusiasm for the project, noting that the other major live music venues in the area were outdoor. "You're talking about an indoor theater," he told the Mercury News, "not one that's going to blare out music with no roof to contain the noise."

The 49ers have recently stated that their intention is to move the team away from Candlestick Park but they haven't completely stopped talks with San Fran about remaining. – CelebrityAccess Staff Writers