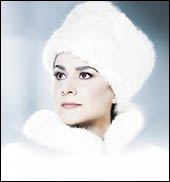 Cecilia Bartoli said, on receiving her Award: "I am so excited! Thank you very much for this wonderful prize. I am deeply honoured and I am very proud. Thank you to the Polar Music Prize for supporting and promoting the universal values of music. For me, music is emotion, passion and humanity. I strongly believe in the power of music and I am here to share my belief with all of you!"

In his acceptance speech, Max Martin, who generally keeps a low public profile, joked, "You blew my cover! I've managed to hide between two speakers in a basement for over 20 years, but you got me!" He said that he has two secrets for writing the perfect pop song, firstly, and this was typically self-deprecating and modest, "to steal. Yes. I confess. I have through the years ripped off giants like Abba, Kiss, Prince….and of course Lasse Holm" And the second, "and most important is love" from Jenny his wife and daughter Doris " I could NOT have done it without you." He concluded with, " to the Polar Music Prize, I can't thank you enough for this honour."

The prize, awarded by Sweden's King Carl XVI Gustaf, was founded by Stig "Stikkan" Anderson, the publisher, lyricist and manager of ABBA, to honour "significant achievements in music and/or music activity and to break down musical boundaries."

The first recipients in 1992 were Paul McCartney and the Baltic States and the most recent, was percussionist Dame Evelyn Glennie and singer Emmylou Harris. The roll call of former Laureates reads like a who's who of modern classical music: Dizzy Gillespie, Patti Smith, Bob Dylan, Ravi Shankar, Renee Fleming, Ray Charles, Youssou N'dour, Mstislav Rostropovich and Kronos Quartet. – Staff Writers