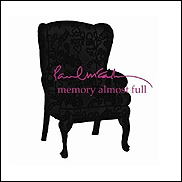 LONDON (CelebrityAccess MediaWire) — Paul McCartney’s album may be getting rave reviews from critics and fans alike, but those might not translate into a chart-topping position for “Memory Almost Full.”

McCartney released his new album, the 21st of his career, on Starbucks’ Hear Music label. Although the disc is for sale in the coffee chain’s 533 U.K. stores, the company is not registered with the Official UK Chart Company, meaning that no albums sold in the coffeehouses will be eligible for the chart on this coming Sunday.

Starbucks has said that it has no plans to contribute data to the official U.K. chart at the moment, according to the BBC.

McCartney’s album is still expected to make the Top 40 this weekend, albeit at a lower-than-normal position, thanks to online stores and digital downloads.

Sir Paul left EMI after 43 years with the company after complaining that the record giant was “jaded.” –by CelebrityAccess Staff Writers