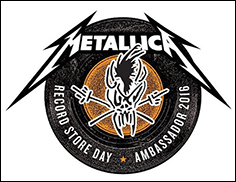 (CelebrityAccess) — Heavy metal icons Metallica have been announced as the official ambassador for Record Store Day 2016.

For Record Store Day 2016, Metallica will release a special version of Liberté, Egalité, Fraternité, Metallica! – Live at Le Bataclan. Paris, France – June 11th, 2003, a live concert recording from the Paris theatre that became the focus of the world in November 2015. As well, the band will be reissuing their seminal releases Kill ‘Em All and Ride The Lightning for Record Store Day 2016.

"As music becomes available either through only the internet or in gigantic airport-size retail stores, it is more important than ever – actually vital – that all us fanatics continue to bring to light the importance of records, and to support to the maximum of our abilities the independent record store outlet. The good news is, of course, that vinyl is making a measurable comeback. But that is not enough for us to rest on our laurels. We must all bond continuously together and scream from every rooftop with our loudest voices, enlighten our kids, fly the flag, and beat the drum (!) to the best of our ability," Metallica's Lars Ulrich said in a statement on the group's ambassadorship.

The band announced that they will donate the proceeds of their new live album to Fondation de France’s Give For France charity, recognizing the larger theme of Record Store Day 2016, which highlights between US record stores and their French counterparts.