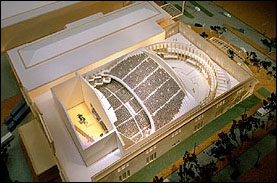 Milwaukee Auditorium will undergo a $32 million renovation to begin November 2001, with completion expected in January 2003.

The renovation will completely reconfigure its main venue, Bruce Hall, reducing its present 6,120 capacity to a more flexible, 2,500-4,400 seat theater with two tiers of sloped seating, enhanced sightlines, and a host of new, or improved patron and production amenities and technologies such as acoustical, sound and lighting and plant improvement; improved public areas with new and expanded restrooms, concourses, elevators and concession area, improved loading dock/stage access and stage equipment including rising orchestra pit and new rehearsal space, improved disability access and revamped meeting and reception rooms — all this while conserving the 92-year-old building's historic elegance and detail.

"The Milwaukee Auditorium is an irreplaceable community asset," said Wisconsin Central District Chairman Franklyn Gimbel. "We have a unique opportunity today to remake it into a state-of-the-art showcase for concerts, theatrical productions, conventions and public assemblies. The alternatives of doing nothing or tearing it down just don’t add up, because building a new venue this size, which would almost certainly happen at some point, would cost this community a lot more money and might not support our convention efforts."

The project will be funded through a $27.3 million, 30-year bond issue and $5 million in uncommitted funds from the Midwest Express Center project. The bonds will be repaid with operating revenues from the facility.

The renovation is being designed by VOA Associates, Inc., architects of similar projects at Chicago's Arie Crown Theater and Chicago Shakespeare Theater, among others, and will be managed by the team of Grunau Project Development, Inc. and Hunt Construction Group.