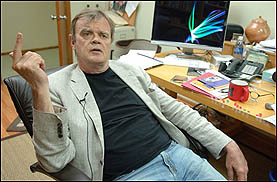 MINNEAPOLIS (CelebrityAccess) — Minnesota Public Radio announced Wednesday that it had cut its business ties with radio host and author Garrison Keillor, the creator and retired host of “A Prairie Home Companion,” over allegations of "inappropriate behavior" with a female co-worker.

In a statement he provided to The New York Times, Mr. Keillor said, “I’ve been fired over a story that I think is more interesting and more complicated than the version MPR heard. Most stories are.”

Minnesota Public Radio said they plan to cease broadcasts of programs containing Keillor, including "The Writer's Almanac" and “The Best of A Prairie Home Companion Hosted by Garrison Keillor.”

Keillor is best known for his tenure as the host of MPR's long-running "A Prairie Home Companion" a weekly variety radio show that has been on the air since 1974. Keillor served as the show's host until last year when he retired from the broadcast.

MPR says the show will continue with its new host Chris Thile, but with a new name.

In an email to the Star Tribune of Minneapolis, Keillor gave his version of the encounter with the unnamed woman who lodged the complaint against him.

“I put my hand on a woman’s bare back,” Keillor stated. “I meant to pat her back after she told me about her unhappiness and her shirt was open and my hand went up it about six inches. She recoiled. I apologized. I sent her an email of apology later and she replied that she had forgiven me and not to think about it.”

Keillor maintained that he and the woman had remained friends after the incident “right up until her lawyer called.”