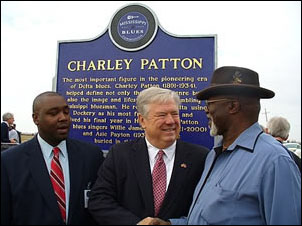 Sponsored by Peavey Electronics and the Mississippi Development Authority, the event will take place at the Marriott Hotel Ballroom in downtown Jackson, MS, preceded by a reception at the Governor's Mansion, hosted by Governor Barbour and First Lady Marsha Barbour. The evening’s focus will be performances by rock ‘n roll legend Jerry Lee Lewis, gospel greats The Williams Brothers, country music icon Marty Stuart, jam band rock sensations The North Mississippi All Stars as well as Swedish pop music superstar Carola. The many styles and genres of these artists reflect the diversity of music that Mississippi has spawned. Proceeds from the evening will benefit the Mississippi Blues Foundation whose Blues Trail project places interpretive markers at notable historical sites related to the history and growth of the blues throughout the state.

In addition to performances by the established stars as noted, the evening will also include a performance circumstance – a medley of songs associated with Mississippi and Mississippi artists – by a group of up and coming Mississippi-based artists who have been dubbed "Mississippi’s future Grammy prospects" by the event organizers. This portion of the evening’s program will showcase the talents of blues-rock artist Scott Albert Johnson; Soulfire, a rhythm and blues group as well as Sweet Water Jade, a female country vocal trio.

The event will offer a salute to the numerous Grammy Award winners and nominees, from the state that gave the world Elvis Presley, B.B. King, Muddy Waters, Faith Hill, John Lee Hooker, Tammy Wynette, Charlie Pride, Van Dyke Parks, Conway Twitty, Jimmie Lunceford and so many others. Since the inception of The Recording Academy®’s Grammy Award in 1958, a disproportionate number of winners – more than forty – and a vast number of nominees have been Mississippians.

In announcing the event, Governor Barbour noted, “Mississippi Grammy Night is a powerful and entertaining way to recognize our state's heritage as the 'Birthplace of America's Music.' This special event will showcase Mississippi artists with phenomenal talents and launch a new level of recognition for our distinct and unique musical culture." Beyond the artists set to perform at the gala, it is expected that a significant number of Mississippi recording artists will be in attendance to lend their support to their home state music initiatives.

Jon Hornyak, Senior Executive Director of The Recording Academy's Memphis Chapter commented, "The Recording Academy is very supportive of this celebration of Grammy winners and nominees from Mississippi. With over forty Grammy Award winners in a variety of genres, the state’s incredible influence is undeniable." – CelebrityAccess Staff Writers