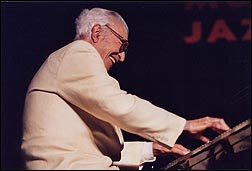 The Monterey Jazz Festival, the pioneering West Coast-styled jazz party, inarguably holds the world record for the longest-running jazz affair, having been born in 1958 on the Monterey Fairgrounds, some 100 miles south of San Francisco. This year MJF turns 50, with its annual three-day gala (September 21-23) taking on special significance with a wealth of performances offered on nine stages spread throughout the festival's 20-acre grounds.

Monterey Jazz Festival Records is a stand-alone label in partnership with the Monterey Jazz Festival and Concord Music Group. The profits realized by the Monterey Jazz Festival will be re-invested into its ongoing internationally recognized jazz education programs. The MJFR imprint's first five recordings, to be released on August 21, capture the crème de la crème of the jazz heritage: Louis Armstrong (caught headlining the first night of the festival in 1958); Miles Davis (introducing to the West Coast his soon-to-be-classic '60s quintet rhythm section in 1963); Thelonious Monk (his quartet augmented by bassist Steve Swallow and an expanded five-piece festival workshop in 1964); Dizzy Gillespie (in 1965 having expanded his usual quintet with Kenny Barron and James Moody to a sextet by adding Big Black on congas) and Sarah Vaughan (backed by a young Bill Mays, Bob Magnusson and Jimmy Cobb – and one tune with the Jazz at the Philharmonic All-Stars in 1971).

The label also promises to document the jazz of the future, says MJFR general manager Jason Olaine, the New York-based former director of A&R at Verve Records from 1999-2004. "We're not going to be stuck in a jazz time warp," he says. "We're excited to deliver important historical music, as well as assemble special projects and all-star ensembles to debut at the festival each year."

Glen Barros, President and CEO of the Concord Music Group, states, "Concord Records has been committed to nurturing and recording renowned artists for more than three decades, as well as discovering and developing new emerging talent. The Monterey Jazz Festival brand fits perfectly with our overall desire to provide consumers the finest documented recordings of all time. The Concord Music Group is excited to be involved in presenting these spectacular, rare and historic recordings to the public for the first time since they were originally heard by audiences at Monterey."

MJF general manager Tim Jackson tells the story of how the label was born. Three years ago while conceptually ramping up for Monterey's monumental anniversary; he started thinking in broader strokes. "I wanted to leverage the festival's assets and use the 50th as a launching pad to make this historical music available to people," he says.

Ten years ago, Jackson worked with producer Orrin Keepnews to compile a three-CD best-of collection for the festival's 40th birthday (Monterey Jazz Festival-40 Legendary Years, released on Malpaso Records, an imprint of Warner Bros.). It was at that time that he discovered that the archival tapes, housed at the Braun Music Center library on the Stanford University campus, were deteriorating from age. Thanks to grants, the festival has digitized all 2,000 hours of the live recordings made at Monterey in the past 49 years. That provided an impetus to set the label project into motion.

As for the contact with Concord, Jackson says he got to know Barros while they both served on the board of Jazz Alliance International. "As a festival, we're not equipped to market records," says Jackson, "but Concord has certainly proven that it's been very progressive in getting CDs to listeners. Glen and I like and trust each other, so we quickly worked out an agreement with the MJF Board of Directors. Plus Concord is a West Coast label with its roots in northern California. We like that too." – CelebrityAccess Staff Writers