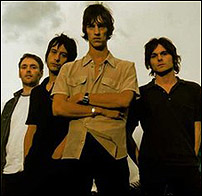 LONDON (CelebrityAccess MediaWire) — British alt-rock band, The Verve, has announced that they are in the studio working on a new album and plans for a followup tour.

According to a post on the band's new website, the group has been hard at work on the new album scheduled for release in the fall of 2007.

Richard Ashcroft, Nick McCabe, Simon Jones and Pete Salisbury will be participating in the reunion, however guitarist/keyboardist Simon Tong is reportedly sitting this one out.

Originally formed in 1990, the band enjoyed some success in the 1990s, culminating in the band's 1997 album "Urban Hymns" which featured the breakout hit "Bitter Sweet Symphony." which charted to #12 in the U.S.

Unfortunately for the band, they reportedly realized little from the song's success. The track, which featured a reversed symphonic sample lifted from the Rolling Stones song "The Last Time," induced a lawsuit from Stone's catalog controller ABKCO Records, who successfully sued the band for all of the royalties from the song. Nor did the band realize any profit from the song's subsequent use in a Nike commercial and the soundtrack of the film "Cruel Intentions."

In the face of these troubles, the band was also having trouble with life on the road. Bassist Simon Jones collapsed on stage and guitarist Nick McCabe withdrew from the tour and the band dissolved shortly after that.

Dates for The Verve's fall tour