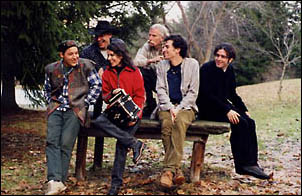 Donna The Buffalo has signed with Monterey
Peninsula Artists in California for exclusive booking representation. Brian Swanson is the responsible agent. One of the more original American roots-rock bands, Donna The Buffalo’s music is a unique concoction of reggae, rock, cajun, country, folk and zydeco blended beneath an umbrella of funk and frequently touted for its intoxicating, danceable rhythms.

Band manager Barnaby Greenberg said, "We are thrilled to be working with Monterey Peninsula Artists. They deservedly carry one of the finest reputations in
the industry as an agency, and I am confident they will play a major role in carrying out
our mission to bring the joyful music of Donna The Buffalo to larger audiences.

"There is so much happening with the band right now that we need a larger agency to
handle our booking requests,” Greenberg continued, noting the band’s upcoming
appearance at the June 21 Bonnaroo Festival in Tennessee, their involvement in The
Other Ones Family Reunion on August 3 and their own FingerLakes
GrassRoots Festival on July 18-21. "When we found out that Brian would be our
responsible agent, it made us all the more certain of the move."

"Everybody here had
already flipped out about their music a long time ago," Swanson said. "Our biggest
goal is bringing the band to a bigger audience. It’s a matter of reaching further and
expanding their horizons. Donna The Buffalo has a tremendous fan base (The Herd),
and the band is so versatile in what they do. We know it’s not going to be any problem
doing that."