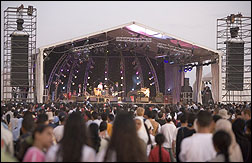 (CelebrityAccess MediaWire) — This year's Friendship Fest, a music festival held in Marrakech, Morocco drew at least double the crowds that turned out last year, attracting over 220,000 attendees. The festival, which brings Christian American and Moroccan musicians together is in its second year.

Originally conceived in 2004 following an invitation by Marrakech Regional President Abdelali Doumou, and with the full support of the Moroccan Wali (Governor), to bring a festival of music to his region, US promoters Harry Thomas and Tim Landis put together a lineup of seven contemporary Christian music artists including: The Crabb Family, Jaci Velasquez, KJ-52, Joy Williams, downhere, George Huff and Ashley Cleveland who performed at the three day festival which ran from May 5-7.

The purpose of Friendship Fest according to festival organizers was to "use the universal language of music to bridge cultures and make friends – to show that people of different cultures and faith traditions can be friends and live in harmony with one another." When asked for his view regarding whether or not these goals were achieved, Regional President Doumou responded: "The goals of Friendship Fest were most definitely achieved. We strengthened our relations with our American brothers and sisters and set the stage for ongoing discussions and future cultural exchanges between our countries. We truly believe that this event represents an historic opportunity for Americans and Moroccans to celebrate together, through music, in friendship and peace." – CelebrityAccess staff writers.