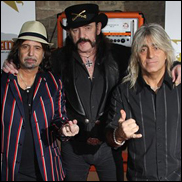 LONDON (CelebrityAccess MediaWire) — After canceling a pair of shows last week after the due to health issues with the band's frontman Lemmy Kilmister, Motörhead has now pulled the plug on the remaining dates on their current summer festival tour.

Motörhead canceled the first pair of gigs in late June after Kilmister was reportedly afflicted with a hematoma, a medical condition in which a mass of localized blood that builds and collects outside blood vessels. These weren't the first medical problems for Kilmister who was recently fitted with an implantable defibrillator to address an irregular heartbeat.

Regretfully, Motörhead announces it has had to cancel its remaining six summer festival appearances. The band hate [sic] to let their fans down by missing any shows, but they expect to be back in full force this Fall.

As you may have heard, earlier this Spring Lemmy had some medical maintenance for the long-term good, He was, at that time, advised to rest, but once feeling better, he of course resumed his life as usual. He has since been advised that he should immediately take some more time to rest

Lemmy says: I'd like to thank everyone who wish me well, it was a tough decision for me as I don't like to disappoint the fans especially in times where economy is bad and people spent their money to see us. But sometimes you can't do anything else than following doctor's orders, but be sure we will be back and kick everybody's ass. – CelebrityAccess Staff Writers