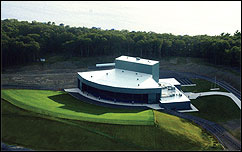 (CelebrityAccess MediaWire) — When the Mountain Laurel Center for the Performing Arts board members walked out of their meeting on Thursday, March 24, all thought that the 2005 concert season, and possibly the facility, were dead, according to The Morning Call.

The Rendell administration, said Blake, agreed to commit $250,000 more to the cash-strapped center in Bushkill, saving both the season and putting a cap on an extraordinary day when all concerned believed the $35 million facility would close for good.

In addition to Rendell’s pledge, Senator Charles Lemmond of PA agree to contribute an addition $125,000 from the Legislature’s “walking-around money” fund, bringing the total to $375,000.

That figure is still far short of the center’s original request of $750,000, but enough for the center to hold an abbreviated concert season of 25 to 30 performances this year.

“It’s enough to make our plan work,” Chief Executive Officer Richard Bryant told the paper. “This is a red-letter day.”

The funding, combined with $2.75 million in revenue from a newly instituted hotel tax, is expected to help carry the debt-ridden center through a three-year plan into solvency.

The 10,000-capacity venue, which includes the Tom Ridge Pavilion, was build in 2002 with a $15 million state grant, $17 million in bonds issued through the Pike County Industrial Development Authority, $2 million in private donation and a $1.2 millino federal grant.

The project suffered mismanagement from the beginning, with millions owed to various contractors amid allegation of financial improprieties that led to a state audit, the results of which have yet to be released.

Bryant was brought into the facility last year to help resuscitate the ailing venue, having worked successfully with the Kennedy Center in Washington, D.C., and Lincoln Center in New York. –by CelebrityAccess Staff Writers