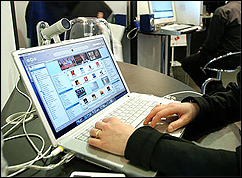 Music-Media, a company dedicated to the composition of music for films, television, publicity, and web sites, is revolutionizing the music market by offering royalty free music over the Internet. At the same time it is proposing a semi-exclusivity system which allows you to sell each song a limited number of times, thereby offering your customers a more exclusive product.

This novel operating model provides possibilities for musical use that have until now been reserved for companies with large financial resources. With this new format any company can put music to its advertisements, web pages, etc. at a cost that is truly affordable: free.

This is not the only new product as Music-Media has developed packages of music especially composed for cinema. These are packages of music composed for a specific genre, including variations on various themes, as well as backgrounds, signature tunes and loops. This is what is proposed to cinema producers so that they can use a soundtrack at a much lower cost than having this commissioned.

Music-Media has opted to distribute its music free so as to be able to offer an economically more competitive product. All of the Music-Media works are covered by the Creative Commons Attributions No-Derive 2.5 licence, under which Music-Media waives the exclusive right to collect, both individually and through one or various royalties collection entities (for example: ASCAP, SGAE, DAMA, VEGPA) the rights to use the works.