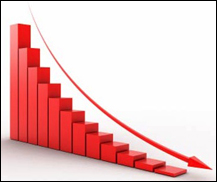 (VIP NEWS) — U.S. digital sales continue to be under pressure. In the third quarter, the digital track sales decline accelerated and now the slowdown of digital album sales growth is beginning to seep into red.


For the nine-month period digital track sales are down 3.4% to 974.5 million from the slightly over 1 billion scans accumulated in the corresponding period of 2012, according to Nielsen SoundScan. But in the third quarter, the decline was nearly 6% to 292.4 million units from the 311 million scanned in the corresponding period last year. That decline follows a 3.3% decline in the second quarter, when scans are compared to the 2012 second quarter, and a 1.3% decline in the first quarter.


While digital album scans year-to-date are up 2.6% to 87.7 million units, the slowing growth the format experienced in the second quarter turned into a drop in the third quarter, when sales declined nearly 5% to 26.9 million units from 28.3 million units recorded during 2012's third quarter.


Also on the good news front: This year has already produced 5 albums that have passed the million-unit milestone versus the three titles that accomplished that feat last year by the end of the third quarter. This year, Justin Timberlake's "20/20 Experience" leads the pack with 2.3 million scans, followed by Bruno Mars' "Unorthodox Jukebox" with 1.23 million units; Imagine Dragons' "Night Vision," with 1.03 million units; Jay Z's "Magna Carta…Holy Grail," with slightly over 1 million units, and beating out the other million unit seller, Mumford & Sons "Babel" by about 2,000 units. Last year, Adele's "21" was the top seller, with scans at almost 4.03 million units.


Moving over to digital tracks, Macklemore & Ryan Lewis' "Thrift Shop," which features Wanz is the top selling song so far this year with 5.96 million units. But Robin Thick's "Blurred Lines," which features T.I. & Pharrell, is breathing down its neck with 5.9 million scans.


Finally, turning to market share, the Universal Music Group leads the pack with 38.3% in share for album plus track equivalent albums (TEA); while Sony Music Entertainment comes in second with 29.1% and the Warner Music Group ranks third with 19.7%. Meanwhile, independent distributors collectively account for 12.3% of market share, but thats when tracking distribution ownership. When independents are tracked by label ownership, their market share jumps above 30%. –According to Billboard