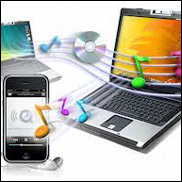 NEW YORK (VIP NEWS) — Music streaming through websites like Spotify and YouTube increased by 32% in the US in 2013.


More than 118 billion streams took place according to Nielsen and Billboard`s 2013 Music Report.


The boost came as sales of physical albums dropped by almost 14%, while digital sales recorded no change.


The number of albums bought on vinyl increased by 33%, echoing the UK trend where events like Record Store Day helped double sales of vinyl last year.


UK figures released by the Entertainment Retailers Association (ERA) last week showed that music streaming was up 33.7% and now accounts for nearly 10% of consumer revenues from recorded music.


The US end of year report compiles Nielsen figures measuring sales, radio airplay and music streams in the US, all of which are regularly used by Billboard to compile its weekly charts.

Justin Timberlake was the biggest selling artist of the year, shifting more than 3.4 million albums. His first album of 2013, the 20/20 Experience, sold almost one million copies in its first week alone, going on to sell a total of 2.4 million.


Eminem`s Marshall Mathers LP2 was America`s second biggest album of the year, selling 1.73 million copies despite only being released in November.


Beyonce`s self-titled album became the second-biggest digital album of the year and the eighth-biggest album overall, with just three weeks on sale before the end of the year.

Pop country star Luke Bryan was the second biggest-selling artist of the year in the US, with the third biggest album, Crash My Party.

However, just 172 million CDs and LPs were sold altogether in the US as increasing numbers turned to streaming sites to get their music – a drop of 13 per cent.


"Despite shifts in how music is consumed, we see continued growth in overall music consumption," said David Bakula from Nielsen Entertainment.

"With more than 118 billion streams in 2013 reported by our data providers, which is the approximate revenue equivalent of 59 million albums purchased, the industry remains vibrant as consumption continues to change and expand."

Both Robin Thicke`s Blurred Lines and Macklemore and Ryan Lewis` Thrift Shop sold more than 6 million digital copies each – a year after Goyte`s Somebody That I Used to Know and Carly Rae Jepsen`s Call Me Maybe became the first two tracks to ever clear the 6 million barrier.

Blurred Lines was also the most played video of 2013, but the most streamed song was Baauer`s Harlem Shake with 489.7 million streams.

The track went viral last year, as groups around the world filmed themselves dancing to it. The proliferation of videos helped the track top the streaming chart.