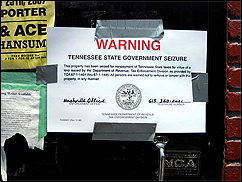 NASHVILLE (CelebrityAccess MediaWire) — A landmark nightclub for up-and-coming acts in Nashville has been padlocked and closed down by the Tennessee Department of Revenue for unpaid taxes, forcing several shows to be relocated to the nearby Cadillac Ranch.

Nashville music venue 12th & Porter was shut down, with two signs taped to the front doors that read, “This property has been seized for non-payment of Tennessee state taxes by virtue of a levy issued by the Department of Revenue, Tax Enforcement Division,” according to the Tennessean.

The club opened in 1984 at 114 12th Ave. N., and has been of particular importance to the Americana and alternative country music scenes that have seen a major rise during the venue’s tenure. The 250-capacity bar, with a artist-acclaimed sound system, was the backdrop for several live albums by artists such as Emmylou Harris and Townes Van Zandt.

Other artists, including Buddy Miller, Lucinda Williams, Nanci Griffith and R.B. Morris have all taken the stage at the club. –by CelebrityAccess Staff Writers