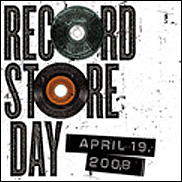 NATONAL (Hypebot) â€“ This Saturday April 19th, hundreds of U.S. independent record stores will join together on for National Record Store Day. The Coalition of Independent Music Stores, The Alliance of Independent Media Stores, Newbury Comics, the Value Music Concept stores and The Music Monitor Network as well as other independent music stores will participate.

"On this day, all of these stores will simultaneously link and act as one with the purpose of celebrating the culture and unique place that they occupy both in their local communities and nationally."

Music, video and gaming will all take center stage with each store doing something different to celebrate including sales, in store performances, demonstrations, swap meets or an "afternoon at a record store" promotion, as well as, provide info on new formats and releases. The goal is to showcase everything that makes an indie store unique.